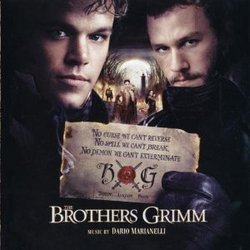 Listening to Italian Dario Marianelli\'s score to The Brothers Grimm, I was reminded of British composer Debbie Wiseman\'s fantastical work on Arsène Lupin. I mention the composers\' roots to make a point: Europeans seem to have a firm grasp on how to move the music through the various sections of the orchestra, of maximizing their instrumental potential. Howard Shore\'s The Lord of the Rings trilogy is brought to mind by that statement, but even he\'s Canadian, not American. Marianelli\'s palette here is broad and he makes the most of it, resourcefully calling upon the brass, the strings, the woodwinds, piano, harp, and percussion to create a cohesive, darkly romantic score that has a distinct woodsy feel to it.

The staccato strings, the groaning celli, the English horns, oboes and clarinets, and the rumbling piano and timpani all contribute, along with the bass, uneasy shifting of synthesized drones, to this organic feeling of musky woods and hardened tree trunks. Every instrument of the traditional classical orchestra is used at some point in the score and Marianelli comes up with original combinations of sounds and techniques to keep you interested with a new idea or a different rhythm every five seconds. Any way you can play a violin, Marianelli uses it: the strings play tremolo ("The Queen\'s Story"), glissando, staccato ("The Forest Comes to Life"), pizzicato ("The Queen Awakens"), solo ("Jake\'s Pledge"), and together as an ensemble. The choir is just one more instrument the composer uses, never putting it at the forefront but, rather, disguising it and employing it as an additional color. He often writes the melody in one time signature and the rhythm in another, to offset the listener and keep him on his toes. The only orchestral section which suffers in the mix is the brass which has been miked too closely and is distorted when played too loud, which is unfortunately compounded by a lackluster performance by the brass players.

Melodic ideas and motifs abound in The Brothers Grimm: "Dickensian Beginnings" introduces the main theme and a dark and clumsy march for the brothers. This main theme has been justifyingly compared to the opening theme from Goldsmith\'s The Hollow Man which, itself, recalled Basic Instinct with a touch of The Haunting. The seven-note core motif is the same here, employed as a fairy tale melody of sorts, and it comes back in nearly every track, in one form or another. The clumsy march is merely an extrapolation of that motif and it returns softly, on woodwinds and fiddle, in "Jake\'s Pledge". When developed further, it reveals itself to be a variation on Keyser Söze\'s Theme from The Usual Suspects. That most popular lullabies of all, Brahm\'s, is smartly used here, most notably in "The Queen Awakens" and "The Eclipse Begins". Another well-known classical piece, the title of which escapes me (hey, I\'m no music major), opens "The Eclipse Begins".

It\'s the ideas and techniques used by Marianelli which warrant the star rating since, without them, his score would have been just another orchestral wallpaper. A Middle Eastern flute and female vocals haunt "Red Riding Hood"; a regal fanfare over militaristic percussion with hints of Eastern bells is heard in "The Queen\'s Story"; a Philip Glass arpeggio makes its way into "The Forest Comes to Life"; electronically-processed col legnos turn "The French Arrive" into a queasy affair; "Burning the Forest" opens with a great percussive assault with low-pitched trombones; and "The Eclipse Begins" contains an amazing Matrix-like passage with overlapping, running strings and woodwinds over a sustained bass line with Eastern vocals. If this sounds more like an enumeration than a review, it\'s because there\'s not much more to say but jump up and down and scream, "Listen to this! Listen to that!". The spell of this doom and gloom, darkly romantic mood is broken only at the end, when the major mode peaks its head a few times before erupting into the scene with a finale flourish in "Sleeping Beauties".

Marianelli\'s work here is educational as well as entertaining: it will show film music students what you can do with an orchestra, how broad your sonic palette can be without resorting to crazy effects and overblown themes. In that, his approach is similar to John Ottman\'s, who makes it a challenge to craft new sounds without resorting to synthesizers. The Brothers Grimm may fail the originality test from a melodic standpoint, but the orchestrations are flawless and the European, almost gypsy flair of the music is refreshing in these times of American easiness.
more reviews by Jonathan Jarry