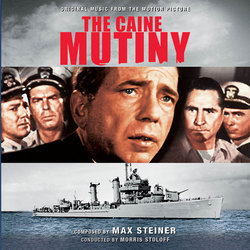 The Intrada release of Max Steiner's score from the 1954 Columbia film The Caine Mutiny has historic importance. Although like many Intrada releases the score had not been previously available, an RCA LP of dialogue highlights was planned to be released at the time of the film. While the record was pressed, it was withdrawn before it officially went on sale and most manufactured copies were destroyed. Featuring virtually no Steiner score anyway, that program would have held little interest to soundtrack fans interested in the complete Max Steiner score. This release now presents the Steiner score in its premiere release, sourced from the mono music elements stored at Sony Pictures Entertainment.

Steiner wrote three themes, both introduced in the "Main Title." The first is a bustling idea that initially serves as a lead-in to the second theme—a noble melody that Steiner dubbed "Full Speed Ahead." Both are on display in the main title: the first has the soul-stirring spirit of a Sousa march, while the second is more measured. The third theme Steiner developed from a pre-existing song, "I Can't Believe That You're In Love With Me."