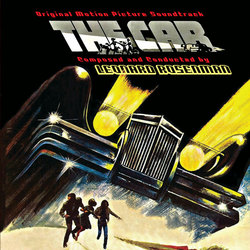 For the 1977 Universal Picture The Car, composer Leonard Rosenman provided a thrilling score anchored around the medieval Dies Irae chant, signaling early on that this is no ordinary automobile on the loose, but a driverless and demonically possessed devil car. This is musically evident from the beginning, with a clanging chord to quickly reflect the arid, desolate look of the film's desert setting, before low brass and contrabass clarinet intone the Dies Irae theme. The action set pieces, which make up the bulk of the score, are especially riveting, with the composer leading the orchestra at an unusually breakneck pace. The film afforded Rosenman the opportunity to compose some of the most wildly kinetic and fast-tempo music in his career.

For this release, Intrada was provided access to the original scoring session masters, recorded onto 1/2″ 15 ips three-channel tape at the Universal Studios scoring stage in January and February of 1977. Every roll of tape survived in pristine condition in Universal's vaults.