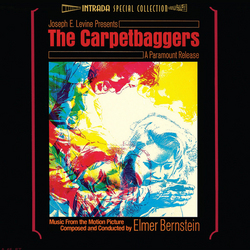 Elmer Bernstein's lush and exciting score for the 1964 Paramount Pictures' film The Carpetbaggers is dominated by his main theme for anti-hero Jonas Cord. In its most common setting, tuba and trombones relentlessly churn out propulsive rhythms for the character's drive and ambition, while above, a swaggering melody captures his sublime arrogance and devil-may-care attitude. This is the score's most versatile theme, and Bernstein puts it through numerous variations—adding sleazy color with sax or clarinet, changing up the rhythm, dropping out notes, and developing new ideas from its melodic fragments throughout.

For this special presentation of Elmer Bernstein's dynamic music from The Carpetbaggers, Intrada was fortunate to locate not only the complete print takes from the soundtrack scoring sessions stored on 35mm elements in the Paramount vaults and newly transferred for this project, but also the album masters for the 1964 LP that Bernstein re-recorded for the Ava label. The original sessions are making their official premiere release in any format here; this is the first appearance of the LP masters on CD. Everything heard here is in crisp, detailed stereo.