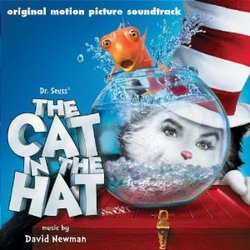 The Cat in the Hat

Review: Cat in the Hat, The

It was inevitable after the outstanding success of Ron Howard's Grinch a few years back that more Dr. Seuss adaptations would be coming to a multiplex near you.  No matter how ill-advised the idea of transforming the good doctor's beloved children's books into films might have been, once scads of money entered the equation there was no question more would be made.

The Cat in the Hat is the second such adaptation to hit the screen and it shares many qualities with its predecessor.  Both star an actor/comedian covered in layers of make-up, both feature bright, over-the-top production design, both add subplots to flesh out the source material's relatively short narrative, and both are full of jokes aimed directly at the parents of its target audience.  But while James Horner's Grinch score had a single inspiration, that of its Christmas setting, David Newman's The Cat in the Hat suffers from a kitchen sink approach, appropriating everything from kazoos to Johannes Brahms's Hungarian Dance No. 5 in F-sharp minor.  This scattershot approach that proves to be the score's major liability.

The Cat in the Hat opens with its best cue, "The Kids," a simple, sprightly piano and bell theme over a prominent I-V-I bass line.  The theme is so sweet it seems directly taken from a bedtime fairy tale, and shows why David Newman has practically cornered the market on children-themed movies.  But as this particular tale was directed by Bo Welch, a former production designer for Tim Burton, it is a slightly skewed one, an aspect that quickly makes its appearance in the score in some almost Danny Elfman-esque choices.  Soon, running marimba scales in disjunct motion, sudden shifts in tone, asymmetric rhythms, and the intrusion of dark brass in random passages make their entrance.  Even the innocent bells are given an eerie ambience.  But still, over it all the same simple, sweet melody floats, never changing.  The totality of this cue shows that these two children are capable of getting themselves in all sorts of trouble, but have a fundamental innocence and sweetness that gets them out of any jam.

Unfortunately, this main theme is about the only recurring idea in the score.  Its treatment through various manic episodes is almost all the score has to offer.  Instead, there are a number of cliches that work well in the film describing the action and I am sure elicit laughs, but are weak on their own.  For instance, at the end of the third cue, "The Cat," the trombones are given a descending "wah - wah - wah- wah," motive.  You know the one, the "oh, too bad," motive.  It is followed in the next cue, "Two Things/Couch Jumping/Leaky Crate," by a trumpet "ta-da."  These elements are fine, but are indicative of why this score works, but never soars.

This is not to say that there are not fun moments to be had.  The score's energy is infectious and the amount of sounds thrown at the listener is staggering.  In a surprising turn, the songs are actually a complement to the score.  As fans of film scores, we often complain of the unnecessary songs in releases, but in this case, the songs are the album's highlight.  Marc Shaiman, who brought us the delightful wrongness of the South Park movie's songs, provides two numbers for Mike Myers to sing.  Shaiman matches the comic's gusto with fast-paced patter verses and quick stylistic shifts to augment the song's text.  He even includes lines from the original book in "Fun, Fun, Fun."  Unfortunately, Smash Mouth's cover of the Beatles's "Getting Better" (most recently heard in Philips TV commercials), while perfectly fine, does not have the sparkle of Shaiman's efforts.

The Cat in the Hat has great songs and crackles with vivacity, but overall is nothing terribly exciting.  But at least we can entertain ourselves with dreams about the inevitable adaptation of Fox in Socks.