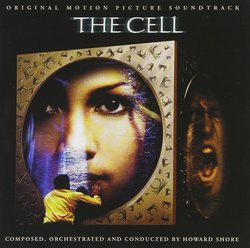 Performed by
The London Philharmonic Orchestra / The Master Musicians of Jajouka

Let me begin this review in much the same was as I began my review for Michael Nyman and Damon Albarn's score to Ravenous; that is to say that no matter what my opinion of the score, I can certainly understand where it would be very easy for some to hate it. For instance, upon seeing the film the girl I was with said, about halfway through the end titles, "I hate this music!" So there's that.

Now, my take on things. Were one to base their opinion of this album entirely on the first thirty seconds or so of it, one would be misled on two accounts. First off, the music has a very exotic lyricism to it, and second, it's not by Howard Shore, but rather an extract from "El Medahey" by Hadj Abdesalam. For the approach that Shore has taken to this score is to utilize the famous Master Musicians of Jajouka playing with the London Philharmonic Orchestra, in full-on avant-garde mode. The result is something that is largely foreign to Western ears, and this is obviously the effect that Shore was aiming for.

Does it work in the picture, though? That can be answered quite simply—it works flawlessly. It provides an uneasiness and altogether foreign feel to a film that puts some unique twists on cinematic psychology clichés. As for the album, it tends to be divided into two categories. First, there's the music with the Master Musicians of Jajouka, which features some beautiful traditional music mixed with intentionally unsettling modern orchestral styling. Secondly, there's music that could be called "typical" of Shore, if there is such a thing—it's dark, brooding, and generally of an atmospheric nature. There's no "theme," per se, to Shore's composition. Of the "Shore"-esque moments, I'd say that they are most akin to his work on Seven.

All of this comes to one question: did I enjoy the album? I enjoyed it, but it's honestly not something I listen to all that regularly. When the disc does go in, it tends to be mainly for "The Cell," "Tide Pool," and "Vital Signs," which feature, respectively, some really great ethnic sound, wonderful suspense, and a haunting finale motif. Still, the fact that this score is nestled between Big and Crash - and not far from the lyrical beauty of Philadelphia - goes to show that Howard Shore is one of the most gifted and eclectic composers working in film today. I, for one, am elated at the prospects for his Lord of the Rings scores.