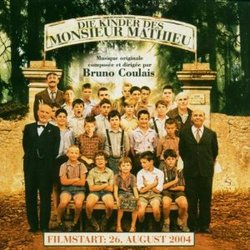 The story of The Chorus follows a tale similar to films such as Dead Poets Society and Mr. Holland's Opus, where a new teacher arrives at a school with more failures than successes, run by an obstinate, unfeeling administration. In this case of this 2004 French film, the new educator is a choirmaster, sent to a school of troubled, delinquent boys and forced to clash with a stubborn headmaster. The film received an Oscar nomination in the category of Best Song, for "Vois Sur Ton Chemin (Look To Your Path)."

The nominated portion functions as the main theme for the score, a piece for boys' choir, boy soprano soloist and orchestra. It is also heard in the opening track, "Les Choristers." It is classical in structure, beautiful textures with a measured pace, syncopated by pizzicato strings and a wandering oboe line in counterpoint. The opening track actually contains the soloist backed by the boys' choir and orchestra while "Vois Sur Ton Chemin" is the full choir only with orchestra. It is a brief composition with an overall melancholy feel, yet a brisk tempo to counter. It is an example of the difficulty in the composing task here, where the score must not only function in the traditional manner but also as music performed on screen by the boys at the school, under the direction of the new choirmaster.

"In Memoriam" continues the boys choir and orchestra mix, but with a more spry, slightly mischievous four note motif to start and the soprano soloist returns to the spotlight. There is also sense of glum drudgery in its pace, like that of children taking no joy in dull, daily, repetitive habits. This track is also featured as an a capella version towards the end of the album. "Pepinot" is the first track with a subdued sense of hope in a new theme and also the first track which utilizes only the orchestra, starting first with piano and building a flurry of activity in the strings and woodwinds. "Les Partitions" brings the main theme back in oboe and horn, but an ominous tone is heard, representing how the boys must fear the school's headmaster.

Hope, as well as the boys' choir, returns in "Caresse Sur L'ocean" and "Lueur D'ete," the latter of which contains the most joyful tone thus far in the album, with an ebullient piano line leading the way through overlapping choral lines. Both "Cerf-Volant" and "Compere Guilleri" are additional brief slice of joyfulness, the former in a waltz tempo, as we can sense the boys really growing out of their earlier drab existence and now making improvements in their situation. "La Desillusion" is a lovely, subtle piece for harp, clarinet and strings, restating the theme from "Pepinot." The next track, "La Nuit," features a capella choir and is quite stately and sweet in its simplicity.

The four note motif from "In Memoriam" is revisited in "L'incendie," as is the solemn tone. "L'evocation" is another restatement of "La Desillusion," but featuring oboe as soloist instead of clarinet. "Les Avions En Papier" is another ebullient piece for boys' choir and orchestra, tracing the flights of paper airplanes. "Seuls" utilizes wordless choir with a syncopated rhythm and delicate chimes, not unlike a lonely Edward Scissorhands-type sound. "Morhange" recaps the main melody through the oboe, but is a track that also includes dialogue from the film, for some reason. The album closes with "Nous Sommes Au Fond De L'etang," which disappointingly also lifts dialogue right from the film, covering choir auditions of the boys in the school. This makes for an anti-climactic end, but prior to this the album is quite enjoyable and memorable for its extensive use of boys' choir and it certainly helps improve my French pronunciation as well!