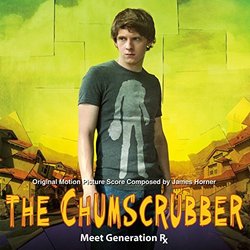 It's not often that you hear about big A-list composers taking on small independent films to score, usually because the productions can't afford to hire such in-demand talent. So when it does happen, you should stop and take notice - because chances are that the composer believed enough in the film to take it on as a project, and probably took the time and energy to make it a score worth examining. Case in point: The Chumscrubber. Released by Newmarket Films, the film cost under $7 million to make, and yet they were able to call upon the services of James Horner to provide them with a rather unique and compelling score.

The soundtrack to The Chumscrubber starts out with a few songs, all of which have the same dreary almost dream-like quality that seems to be the "standard" for indie films about teenage angst. Phantom Planet's "Our House" sets the tone, and the songs that follow all seem to stick to minor-keys, just to keep you from getting too happy about things. The best part of the album, of course, is Horner's score, which so different from anything else he's done in recent years that I can't help but breathe a sigh of relief, knowing that he still has it in him.

Ironically titled "Spreading Happiness All Around", dissonant atmospheric tones give way to an almost waltz-like saxophone and celeste that feels like something Elfman might have dabbled in back in the early 1990s. Distant synth tones eventually take over, leaving the cue on a not-so-happy note. In many places, the score actually reminded me of the same tone set by Michael Andrews in Donnie Darko, but without being as bizarre. The saxophone theme is used in "Kidnapping the Wrong Charlie" and "Pot Casserole", and a variation of it shows up in the finale, "A Confluence of Families". Shifting major/minor chords on piano with synth pads and bowed cymbals and other-worldly effects in "Dolphins" make it a surreal cue.

"Digging Montage" would feel right at home in a Michael Mann film, with the slowly pulsing atmospherics and tones washing over each other. "Parental Rift / The Chumscrubber" contains a rather abrasive moment of thrashing electric guitars, which slowly give way to the soft strings struggling for survival underneath. "The End" wraps up the score with pizzicato strings and celeste.

The average film score listener will not be able to guess that this is a score composed by James Horner. In fact, a few of the people I've played select cues to thought that it was Hans Zimmer, Danny Elfman, or even Christopher Young. While certainly there might be some stylistic overlap with the aforementioned composers and this Horner score, the fact remains that this score totally took me by surprise, and has the distinct possibility of sneaking up behind the other "expected" contenders for a coveted spot in SoundtrackNet's "Best of 2005" list. If you're on a budget, you might want to make sure to save up and include The Chumscrubber in your collection. Otherwise, what are you waiting for? It's in stores now!