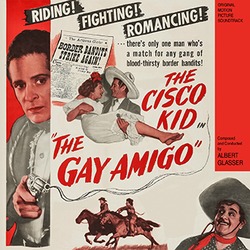 The Cisco Kid in The Gay Amigo

What a fascinating and colorful history the character of The Cisco Kid has. The character was introduced by author O. Henry in 1907 in the short story "The Caballero's Way," which was published in a collection called Hearts of the West.

After a whole slew of Cisco Kid films (the first was made in 1914) involving several different actors in the title role, in 1945 came another series of three films, this time from programmer studio Monogram. This time the film starred the man who would forever by identified with the role, Duncan Renaldo. Then yet another series of films were made, six in all, and all made in one year – those all starred Gilbert Roland as the Kid. Then Renaldo returned to the role in 1948 with The Valiant Hombre – this time Pancho was played by Leo Carillo. Renaldo and Carillo would do five films and then they both starred in what would be the most popular iteration of them all – the classic TV series filmed by ZIV starting in 1950. There is no kid who grew up watching the show who didn't say the series' classic tag line, "Oh, Cisco" "Oh, Pancho."

For the series of films with Duncan Renaldo, The Cisco Kid got a new musical voice – composer Albert Glasser, who'd been scoring low-budget programmers since 1941. It was Glasser's music that would become identified with The Cisco Kid and of course he went on to score all the episodes of the TV shows. His main theme was iconic and instantly identifiable, and his music for the films and TV show was exciting, melodic, and classic Glasser, especially in the blaring chase scenes.

This release comes from a tape made by Mr. Glasser, a tape that was in decent enough sound (some of his tapes were better than others), but other than the title, the tape box contained no real information. This tape and others from its era were from his acetates. When we began working on this project, we all assumed this tape contained cues from the TV series, but while Glasser did recycle quite a bit of music from the film series into the TV series, after a lot of research we realized that what we in fact had was the almost-complete score to the 1949 film, The Gay Amigo, which was the second of the final five Cisco Kid films prior to the TV show. There were slates, of course, but for this release we gave the tracks some titles, just for fun. The masterful Chris Malone labored over the sound for a long time and the result is as good as this is going to sound. To fill out the CD, we include suites from the TV series, Big Town, as well as short suites from the films The Buckskin Lady and Top of the World.