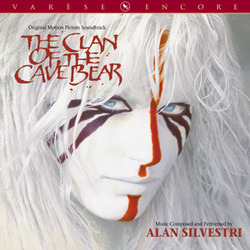 The Clan Of The Cave Bear

The film gave Silvestri a huge canvas. Based on the first of Jean Auel's four bestselling prehistoric novels set 35,000,000 years ago, this epic film tells the story of one woman's struggle for acceptance amidst a barbaric clan. Daryl Hannah (Grumpy Old Men, Legal Eagles) is the Cro-Magnon who seeks shelter among a tribe of Neanderthals. Extraordinary location photography and a script by John Sayles (Passion Fish, Eight Men Out) make this a truly stunning motion picture. Co-starring Pamela Reed (Junior, Kindergarten Cop) and Curtis Armstrong (Risky Business, Revenge of the Nerds).

The score has been out of our catalog for over 20 years which means that, like with each of our other Varčse Encore releases, it really is, for all intents and purposes, a brand new release.