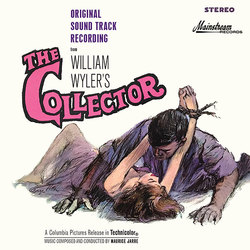 Intrada announces a double-header from the Mainstream and Ava record catalogs: Maurice Jarre's The Collector and Mark Lawrence's David & Lisa. Both films feature lead characters with psychological problems, one completely unchecked, the others in an institutition. The 1965 Columbia film The Collector features relative newcomers Terence Stamp and Samatha Eggar. Stamp plays the title character, which carries a double-meaning. He's a collector of butterflies, but he also collects a woman, abducting her off the street. The film shows how their relationship develops during her captivity. For this disturbiing film, Jarre composed a delicate, sometimes quirky score, and as described in the liner notes, sometimes "oddly nostalgic." While previously released on CD, this is the premiere release from the original LP masters without any alternations made to the original recording, resulting in crystal clear, dynamic sound.

The 1962 film David & Lisa features Janet Margolin and Keir Dullea in the title roles, one schizophreic, the other "morbidly" neurotic, and each attending a school/mental institution. Each is attracted to the other and their friendship helps them better manage their own afflictions. Together the whole is really stronger than the sum of its parts. And for David & Lisa, composer Mark Lawrence wrote a subtle, sparse score with just the right amount of emotion to portray the complexity of the personalities on screen. Half of the album presents the original score, while the other half presents outstanding jazz versions peformed by Victor Feldman and his All-Stars, which is a separate highlight of this presentation altogether. When originally released on CD, paired with Jerry Goldsmith's A Patch of Blue, only the mono master was used (even omitting one cue). This release presents the complete program in stereo for the first time on CD!