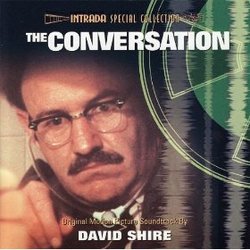 Every soundtrack fan should remove their hats and give a moment of respectful silence to San Francisco-based label Intrada. Their latest coup is the release of none other than one of the single most requested soundtracks of all time, David Shire's lonesome and haunting piano score to Francis Ford Coppola's seminal 70's paranoia flick, The Conversation. How many other labels can claim that?

Actually, forget the moment of silence. Just go buy this CD. You won't be disappointed. That is to say, you won't be disappointed if you love scores drenched in mood and style rather than piled high with furiously empty orchestrations. Shire's score to The Conversation is comprised largely of the composer himself playing solo piano, augmented occasionally by spare and shrill electronic effects that'll send shivers down your spine. The main theme is truly unforgettable, sticking with this listener days and days after I first saw the film years ago. So if you thought The Firm was the first score to try and pull a stunt like this off, check again.

It was in the early 1970s when Coppola found enough time between the completion of his ultra-successful film The Godfather and its impending sequel to embark on making a much more personal film. Inspired by Antonioni's Blow Up, he concocted the story of professional eavesdropper Harry Caul (Gene Hackman) and the series of events that turn his very private life inside out. The film was eerily prescient in its dealings with issues of privacy: Watergate was just around the corner.

Much talk has been made of the manner in which The Conversation was composed. You've probably heard about how Shire originally balked when Coppola didn't want an orchestra, and how he relented when the director waxed rhetorical about the inherent "loneliness" of the solo piano and it's appropriateness for the film's central character.

But there is much more to the fascinating musical world of this film. In the liner notes, sound designer and supervising editor Walter Murch talks about how the body of the score was written before a frame of film was shot, and how it was tracked in later as he and Coppola saw fit, incorporating the aforementioned electronic effects to pull the audience into the crumbling mindset of Hackman's wiretapper.

Coppola himself also talks here about how he had Shire write music to hypothetical scenes that weren't even in the script, purely to evoke specific emotions. As Harry Caul is a stoic, taciturn character, Coppola understood that much of his underlying repression and sadness fell into the hands of the music. What the film ends up with, and it works like gangbusters, is a central character who refuses to say much of anything about his own personal life, but a score that tells you everything anyway.

And that score is presented here, every last classic note of it, sequenced slightly out of order to create a more listenable experience. Considering the amount of shrieking dissonance that invades the last act of the film, this is one case where this type of composer re-sequencing serves the album quite well.

The disc opens with the "Theme From The Conversation", a bold statement of the central musical ideas in the picture and a fitting overture that does not appear in the film, but is quite welcome here. "No More Questions" introduces what will later become "Amy's Theme", a sad and undulating chromatic piece underscoring Harry Caul's inability to communicate and isolation from his girlfriend Amy (played by Teri Garr). Also present are original source cues highlighting protagonist Harry Caul's (Gene Hackman) love of jazz music, as well as another real treat: a full ensemble version of the main theme, never before released, rounding out the disc. While not at all bad, this track is a fascinating glimpse of the standard blues / thriller score Coppola and Shire worked so hard to eschew, and a true testament to how spot-on perfect their avant-garde approach was.

So take a bow, Intrada (and everyone else who helped make this spectacular album a reality). You have done amazing work here, immaculately preserving the work of several of our most gifted filmmakers at the height of their craft. The Conversation is music that not only sticks in your head, but music that influenced (and arguably created) a completely new kind of psychological thriller score.

The Conversation is available for sale at Intrada's website, http://www.intrada.com/