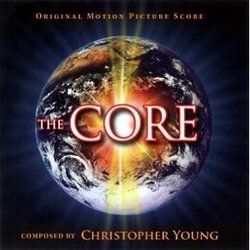 The core of the Earth has stopped spinning, causing a spate of natural disasters across the globe - so we're told - but the heads of audiences certainly seemed to be left in a daze as they tried to come to terms with the premise of one of Hollywood's more recent forays into big-budget disaster movie genre. Getting its theatrical release in March of 2003, The Core told the story of an intrepid team of scientists taking a journey to the centre of the Earth in the hope of detonating a nuclear device that would set the world in motion again. The film faired somewhat poorly with critics and cinemagoers.

It goes without question that a movie like this is going to throw any trace of subtly out the window, and Christopher Young's score, rightfully so, has no qualms in keeping in line with this fact he delivers a delightfully over the top and tremendously exciting piece of work. Unfortunately fans were left to add The Core to the composer's growing list of unreleased scores, however this would be one promotional release that would not entirely be left out of the reach of collectors.

Earlier in 2004 Intrada released Young's score for The Tower as part of the label's Signature series. Limited to 1000 copies, those lucky few who were able to get their hands on it found themselves with an unexpected bonus in the shape of the two-disc promotional release of the score of, you guessed it, The Core. Like many a good score out there, The Core succeeds in painting a vision to the listener at home that reaches beyond the confines of the movie itself. It's quite a gift to have what is pretty much the complete score presented to you as Young's music here is not just very good, but consistently so over the length of both CDs. Original? Hardly, but this is far from a slap dash approach to scoring a movie of this ilk.

Beginning, where else, but with "The Core," the films main titles, here as we pass the brooding low key notes that take us into the movie we are hit with a sudden burst of the main theme in an almost fanfare like arrangement. Whilst the main theme is very much present in many of the cues, it feels often underplayed partly thanks to the fact that the score as a whole lets it evolve as things progress. In many of times you'll hear it feels different, expanding, an alternate approach to the arrangement, even a choir even left to carry the motif in a number of instances.

The sense of imminent danger in the music is with us remarkably early on and almost never lets up save for the times where the composer allows things to delve into the somewhat melodramatic. Of course it is hard to discredit the score for delving into such territories as it is all part and parcel with these kinds of films, and what Young delivers in the lower key moments is certainly well beyond the norm for this type of affair.

With such moments, unlike for arguments sake, Armageddon, this isn't a score that feels overtly patronising in its tone dictating any one specific emotion to the listener. This score isn't going to try and blatantly come out with an insipid little solemn theme amidst a bravado of heavy action accompaniment, instead The Core seems to know its place with every note and musically it becomes all the better for it.

In recent memory, I can't think of a score that I've found to be as fun to listen to as I have found The Core. In its year of release, Young's score found itself to be up there alongside Goldsmith's rejected score for Timeline as one of the most sought after unreleased scores amongst fans of film music. Whilst we've been graced with a release of the later, it is a shame that the majority are still left without the chance to own this score in any form. Things may change, but in the meantime, for those fortunate enough to own it, the promotional release is certainly one to treasure.