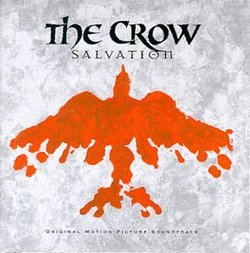 The soundtrack to the third of the Crow movies continues in its predecessors' tradition of blending hard rock, thrash metal, and even techno in pairing dark music with the plot's "citywide conspiracy of lethal corruption." I found this disc to possess a mixed bag of features: a few truly enjoyable pieces, a great many "okay" ones, but having a few terrible works.

On this soundtrack album, the best track is undoubtedly the third: "Bad Brother," performed by The Infidels and featuring Juliette Lewis. After listening to this song just once, you'll want to play it at 100 decibels while cruising down the highway. (Radio DJs yearning to play this will have to monitor the song's beginning and end for content.) Another enjoyable song was a remix of Stabbing Westward's "Waking Up Beside You." Perhaps too moody for those of the top-40 persuasion, someone who leaned toward industrial or moodier dancehall would do well to spin this tune. Filled with great ambience, guitars, and a drum machine, this is more great driving music.

More straight-ahead techno lies with The Crystal Method and a mix of "Now Is The Time." Similar in feel to early-to-mid nineties rave-friendly tunes, and with a relatively "big name" artist behind this track, expect to hear this kinetic work at your friendly neighborhood dancehall or club. Similarly, an experimental, yet strangely danceable track lies with Sin's "Painful." It emotes smoke-and-laser-filled, underground parties. Crazy synths reminiscent of Depeche Mode fill the musical space beside overdriven guitars. Yummy.

The fifth and sixth tracks are probably the most commercial and radio-friendly.

Notable for its mediocrity, the Kid Rock tune "Warm Winter" bored me greatly. Also wasting valuable CD space is a study in a contrast that doesn't work. Its lyrics are inconsequential in nature, seemingly suited for a pop or punk/pop work. Instead, the texture of Pitchshifter's "Everything Sucks (Again)" is dark and techno-pop in its feel. The incongruity truly sticks out and prevents enjoyment of the song.

On the whole, I found that this soundtrack had more listenable tunes than "where's the remote" songs. However, I wouldn't go as far as to call this a "must buy." No piece of music on this album truly stands out on its own, unlike, say, the first Crow soundtrack. If you have some extra bucks though, and are a fan of murky, powerful, angry music, listen to a couple tracks and decide for yourself. As for myself, I'd give it three out of five stars.