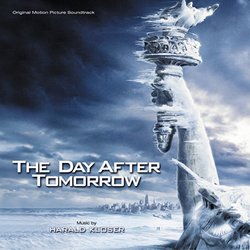 The Day After Tomorrow

Review: Day After Tomorrow, The

The Day After Tomorrow, director Roland Emmerich's latest excuse to destroy New York (now the third time), is a film that uses the weather (specifically, the results of global warming) as a means of destroying much of western civilization, and ushering in a new ice age.  Unlike Independence Day, this film focuses not on action, but rather the human element.  The estranged relationship between paleoclimatologist Jack Hall (Dennis Quaid) and his high-school son Sam (Jake Gyllenhaal) is explored.  Trapped in New York City after a tidal surge washes through Manhattan (and is subsequently frozen by a flash-freeze), Sam tries to keep a few survivors hopes alive, as Jack struggles northward from Washington D.C. to rescue them.

Scored by Harald Kloser, the film called for more emotional dramatic music than high-tension action.  The disaster scenes (tornadoes in Los Angeles; tidal wave in New York) allow Kloser to provide us with the needed thrills, but the bulk of this album release is dramatic - which is definitely a plus.  The album starts off with a solo female singing a rather ominous four-note melody.  This melody is part of Sam's theme, but this ominous female solo version will pretty much never be heard again on the album, and only has limited appearances in the film.  The bulk of this first track is comprised of the main theme from the film, which slowly builds over the string section in "The Day After Tomorrow".  It's a rather emotional, even heroic theme, and the nice thing is that it gets plenty of use throughout the score.

There are some ominous tracks on the album (this is still a disaster film, mind you), and the tension built in "Tornado Warning", "Tidal Wave", and "Superfreeze" is quite palpable.  Kloser handles the orchestra well, using synth elements only sparingly for percussion and occasional effects.  "Sam!" and "Body Heat" feature Sam's theme, which again helps provide the needed emotional element for the film.  (Unfortunately, I found that this crucial element was lacking in the performances, and when the press laughs at "serious" moments, you know your film is in trouble!)

"Cutting the Rope" is another somber cue, as well as "Because of You".  The main theme is heard, in a rather uplifting rendition, in "The President's Speech".  It segues quite nicely into "The Human Spirit", which when combined with "Burning Books" concludes the album with a very warm and fuzzy feeling.  While I felt the film was terribly flawed in many respects, the music did stand out quite nicely, and helped boost the depth of the film, as it was meant to do.  Kloser might not be well known to film score fans, but with his wonderful score to The Thirteenth Day, this score, and his upcoming Alien vs. Predator, he is undoubtedly going to make an impression this year.