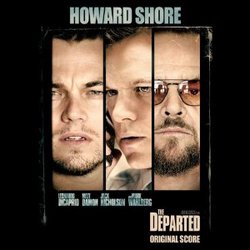 Howard Shore\'s score to the Martin Scorsese\'s The Departed faithfully obeys the rules of simplicity and restraint. This is not to say that the music isn\'t listenable or well-written, which it very much is. Featuring a blend of contemporary instrumentation and traditional orchestral scoring, Shore sticks closely to acoustic guitar, electric guitar, and strings as the musical voice for the film. The result is subtle and effective underscore that only briefly and gently dips into gravitas.

"Cops or Criminals" sets a contemporary tone with acoustic guitar, while "344 Wash" introduces the electric guitar. Expect to listen to solos for either of these two instruments in nearly every track. For variation, we get the mass of atonal, ominous strings backing acoustic guitar that begins "The Faithful Departed" or the more insistent string rhythms that highlight "Command". "Billy\'s Theme" is a standout cue, notable for the soothing acoustic guitar that comprises tracks like "Madolyn", but then begins to develop into more emotional musical writing. "The Last Rites" also approaches a sense of the dramatic through the counterpoint between strings and electric guitar. "Chinatown" is notable for a harsh, looped synth beat underneath decidedly sinister strings, while "The Departed Tango" is, appropriately enough, a lively tango.

Put bluntly, this soundtrack won\'t knock anyone\'s socks off, but it\'s a great listen regardless. Shore was obviously going for minimalist underscore here, and it works very well on album. Only toward the end of the score does this approach begin to sound repetitive. That Shore, the same composer who wrote the massively dense music for the Lord of the Rings films, was able to pull back to the extent that he does for The Departed reveals much about his versatility and range. Perhaps of greatest interest to collectors of film music, the score for The Departed is a stylish and understated work.

The album is currently available as a digital download, but will be released on CD from New Line Records on December 3, 2006.