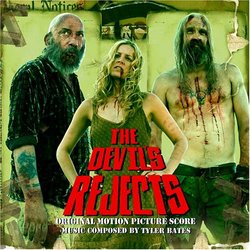 Performed by
The Khaki Palms Orchestra

Powerful emotions, visceral imagery, and explorations of the dark side of human nature are just some of the basic components of horror films. Good horror films can provide film composers great tableaus upon which to paint their musical compositions. Oddly enough, however, the current horror boom has not given birth to many great scores. Several exceptional horror films within the past year or so have been saddled with mediocre and lifeless scores - Dawn of the Dead, Land of the Dead, and now, The Devil\'s Rejects.

Devil\'s Rejects was the celluloid equivalent of the middle finger this summer. Sneering in the face of big-studio banal mediocrity was this dirty, mean, and nasty little flick chronicling the next chapter of the murderous Firefly family. For fans longing for the days when horror films were raw, exploitive, and free from the dreaded restrictions of a PG-13 rating, Rob Zombie\'s throwback to 70\'s style films was a welcome breath of fresh air. It\'s a work of singular vision.

How ironic it is then that a director with Zombie\'s musical talent and background would settle for a score so unremarkable. Like the previously mentioned films, the score for Rejects is merely adequate and one wishes it was so much more. Does it work in the film? Sure. Does it stand on its own as a listenable score? No. The average length of the cues on this score is about 2-and-a-half minutes. There are composers who can work in such small time constraints. John Carpenter and Rob Zombie are two such composers. They understand how to create mood and melody within that framework. Zombie\'s music for his own House of 1000 Corpses showed that he knows how to create a score for a whole movie. Even the short musical interludes Zombie put on his solo albums are more effective than what is on this album. Looking at his score for Dawn of the Dead (2004) and this, it is clear Bates doesn\'t know how.

Bates tries to evoke a sense of dread and despair by creating cues that mimic the style of dark ambient music. One of the best progenitors of dark ambient music is Brian Lustmord, who creates richly layered soundscapes out of droning sounds, effects, and slightly changing tones. It works when the tracks are 15 minutes long, but it doesn\'t work in a two minute cue. The rest of the tracks consist of rhythmic synthesizer action cues lacking in melody or texture. Bates even drops the ball during the opening shootout between the Firefly family and the police. "Shootout" ends just when it begins to sound promising. Towards the end of the rhythm cue, he introduces another layer which seems to build to something big. Unfortunately it ends just as it gets going.

This is not to say the score is completely without merit. The tone of the score is set at the beginning with the effective track, "Tiny and His Girl/ Police". "Dirty Knees" is simply creepy and eerie for the scene when Otis and his sister, Baby, begin their mental torture of two couples held hostage within a seedy motel room. One of the reasons it works is because it\'s one of the longer cues (4 minutes). Two other notable cues are "Ride the Horse", featuring a funky melodic groove for Capt. Spaulding\'s dream, and "We\'ll Come Back For You" with its dreamy voices foreshadowing the Firefly family\'s fate. Both are melodic and sound like nothing else on the album.

A friend asked whether this score would\'ve been better if the producers had maybe joined some of the cues together in the form of suites. After thinking about it and listening to the score a few more times, the answer would be, "No". There\'s nothing thematic with which to tie the cues together. Combining a bunch of short annoying percussive synth tracks or droning noises to create a longer track would only make it more annoying. Even more depressing is the fact that the score to Devil\'s Rejects is so similar in sound and feel to the scores for the recent Land of the Dead and Bates\' Dawn of the Dead. Put these three scores on an iPod and hit shuffle. It\'d be nearly impossible to tell which track is from which movie. All three are simplistic, one note, and are seriously lacking in flavor and personality.

The song soundtrack released separately and featuring 70\'s southern rock from the likes of the Allman Brothers, Terry Reid, and Lynyrd Skynyrd works so much better at capturing the feel of the movie than this score. If you\'re a fan of this movie, that\'s the album to get.