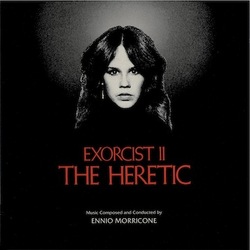 The Exorcist II: The Heretic

Ennio Morricone is among the legends of film music composers. He has sold over fifty million albums worldwide and written music for over 500 movies, television shows and classical recordings over the course of 6 decades. His best known works include five Oscar nominations (as well as a lifetime achievement award) for Days Of Heaven, The Mission, Bugsy, The Untouchables and Malena. We are proud to reissue this album as well as offer it at a really low $12.98. We here at Perseverance Records couldn't be prouder that the first release in our new series is this particular soundtrack. We love the maestro's work and felt that many people missed out on the Warner France reissue from the early decade.

Please enjoy. For anybody asking why this is being released the way it is, it's simple. I want to make sure these kinds of releases get the light of day at reasonable prices. There are many other consumers out there who aren't avid collectors and simply buy a film score because they saw the movie on TV or heard it someplace. They are the silent minority when it comes to film score sales. We want to provide you and them a chance to own these releases at a reasonable price versus the crazy sums of money speculators try to charge.