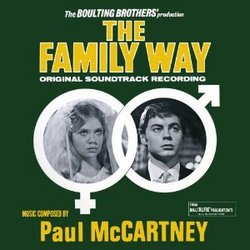 The Family Way is a 1966 British comedy-drama film staring John Mills and Hayley Mills. Paul McCartney composed the soundtrack. The recording was arranged and supervised by Beatles producer George Martin.

The original 1967 soundtrack recording to The Family Way begins with McCartney's theme, "Love in the Open Air," and contains 12 more (untitled) instrumental themes suited to the onscreen action. For his composition, McCartney was initially inspired by the sound of brass bands, familiar to his childhood in the North of England.

The soundtrack is mastered from the original first generation stereo master tapes.

This is the first official CD release and includes all 13 tracks from the original album release plus a bonus track: the previously unreleased stereo mix of "Theme From The Family Way," credited to The Tudor Minstrels.