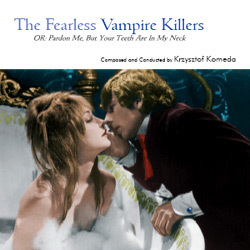 Starring Roman Polanski (who directed himself) with his gorgeous wife Sharon Tate, this hilarious parody of the vampire genre was lavishly staged with sumptuous costumes and sets. This official first-time release of Christopher Komeda's score is again supplemented by copious notes written by film music writer, Andrew Keech and includes rare photos of Sharon Tate taken on set by Polanski. Simply outstanding!