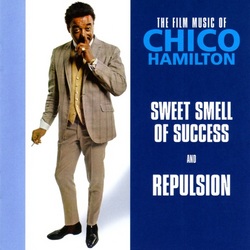 The Film Music of Chico Hamilton

First up is for Roman Polanski's first English-language movie, the dark thriller Repulsion which starred Catherine Deneuve. The full length version of 'Carole's Walk' is here along with the other cues.

The Sweet Smell of Success was directed by Alexander Mackendrick, although American-born became most famous for his so-called "Ealing Comedies." This tale of the Big Apple's under-belly that starred Burt Lancaster and Tony Curtis featured Chico Hamilton and we present here, additional cues that were co-composed with cellist Fred Katz. An important release!