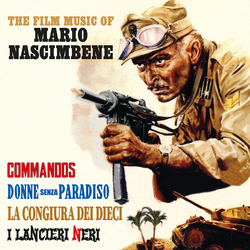 The Film Music of Mario Nascimbene

Quartet Records, in collaboration with Cinevox and Mercury Editions, presents music by Mario Nascimbene —a collection of four scores showcased on a single CD.

Donne Senza Paradiso (1962) was an Italian-German coproduction directed by Giorgio Capitani and Rudolf Jurgent about the memoirs of Swedish doctor Axel Munthe. Munthe was a fashionable physician in Paris who built one of the best-loved houses in the world, San Michele, on the Isle of Capri, on the site of the villa of the emperor Tiberius. The composer offers a grandiose romantic score, one of his best, for the doctor's obsession with the Mediterranean island.

Swashbuckler film La congiura dei dieci (1962), directed by Baccio Bandini and Étiene Périer, and starring Stewart Granger and Silva Koscina, is about an English mercenary escorting a girl to her arranged marriage until he realizes the true dark deals behind the arrangement. Nascimbene's music is among his more traditional scores, written in the vein of the Miklos Rozsa MGM scores that graced so many of Granger's adventures at the studio.

Adventure movie I lancieri neri, directed by Giacomo Gentilomo, features Mel Ferrer as a knight forced to fight his brother after the latter joins forces with the Tartars. The composer provides an epic, colorful and romantic adventure score, which among his best efforts for the genre.

The music included on this CD from Commandos and Donne Senza Paradiso is the only available material and was previously included in an exceedingly rare 1968 Cinevox LP. La congiura dei dieci and I lancieri neri have never been previously released in any format. The four scores offer symphonic, action and romantic music in the way only Nascimbene could write it. None of these scores is complete, but this release includes all surviving material, resulting in a comprehensive program for each.

The entire collection has been prepared and supervised by Claudio Fuiano, restored and mastered by Chris Malone. The richly illustrated 16-page booklet features extensive liner notes with Gergely Hubai discussing the composer, the films and the scores.