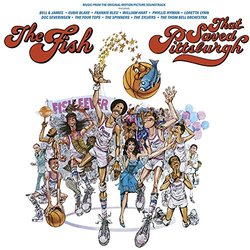 The Fish That Saved Pittsburgh

Real Gone Music and Second Disc Records are tipping off 2017 with a slam dunk release! The 1979 cult favorite film The Fish That Saved Pittsburgh featured an all-star team from the worlds of basketball and Hollywood - Julius "Dr. J" Erving, Meadowlark Lemon, Kareem Abdul-Jabbar, Jerry Tarkanian, Stockard Channing, Jonathan Winters, Flip Wilson, Debbie Allen, Harry Shearer, and more – for its fantastical tale of a struggling Pittsburgh basketball team that beats the odds with a little help from the heavens. The movie's soundtrack was equally illustrious. Pop-soul maestro Thom Bell, renowned for his work with The Spinners, The Stylistics, The Delfonics, and Johnny Mathis, wrote, produced, arranged, and conducted his very first motion picture score, and the result was a soul symphony incorporating funk, disco, and jazz rhythms, and of course, Bell's trademark luscious balladry. An A-team of R&B's finest artists was enlisted to perform Bell's all-new songs, including The Four Tops, The Spinners, Bell and James, Phyllis Hyman, The Delfonics' William "Poogie" Hart, and The Sylvers, plus country superstar Loretta Lynn, ragtime legend Eubie Blake, and the one and only Doc Severinsen. Yet, when the movie came and went from theatres, so did the soundtrack album…until now! The Fish gained a cult following on television and VHS, and now, it's time for its sizzling soundtrack to have its chance on the court, too. Hip-hop's most tuned-in artists have already sampled these lost grooves; now you can hear the originals! The first-ever CD release of The Fish That Saved Pittsburgh boasts a sparkling new remastering from the original Lorimar Records tapes by XXX at Sony's Battery Studios, detailed liner notes by The Second Disc's Joe Marchese featuring fresh quotes from Thom Bell, and three rare bonus tracks: two distinctive 12-inch mixes of Bell and James' infectious title track, and the lush, dramatic "Pisces Theme."