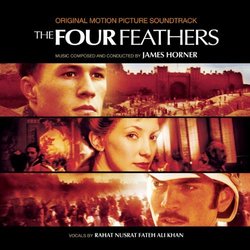 In the seventh film version of the novel of the same name, The Four Feathers explores what it meant to be British in the late 19th century, with themes of honor, pride and dignity running throughout.  Most of all, the film (starring Heath Ledger, Wes Bentley and Kate Hudson), was about friendship.  Directed by Shekar Kapur (Elizabeth), the film boasted a sweeping score by James Horner.

Horner's score is, on the surface, more of the same dramatic fare he's been giving us for the past few years.  A strong melody (heard on piano in "The Dance") is used throughout the rather lengthy album.  Of course, the orchestrations are solid, and there are plenty of allusions to his previous scores that will keep fans squirming yet satisfied.  Contributing to the sonic texture of the score is singer Rahat Nusrat Fateh Ali Khan.  Many folks might find his work either grating and want to skip over them, but there are a few action sequences where it works quite well.  ("Sniper!" and "Escape", for example.)

A flaw of the album is that as a listening experience, it's too broad.  How Sony managed to do it is beyond me, but this album runs 79:18 - which is just about 25 minutes or so longer than this album needed to be.  Don't get me wrong - I really enjoyed it, and it got plenty of playtime in my stereo - it's just that it's almost too much to take in at once.  The solid themes and exciting action music, though, make this score stand out above Horner's other war film of 2002, Windtalkers.  The last track, "A Coward No Longer" is a great suite, and ends the album on a great note.  Devoted fans of Horner's work will probably want to pick this one up, and those who enjoyed the film might find it to be a satisfying memento.  But be prepared for a long haul.