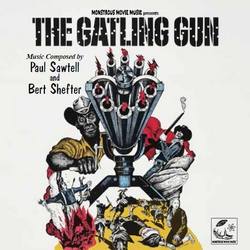 The Gatling Gun was one of the last films co-scored by the talented team of Paul Sawtell and Bert Shefter. This 1969 western was produced by organized crime under the title King Gun, but due to legal problems was not released until four years later, in greatly re-edited fashion.

The thrilling 50-minute score features a full orchestra augmented by guitar, harpsichord, Fender bass, and other auditory delights, all in fabulous stereo sound! A 24-page booklet makes a wonderful release even better!