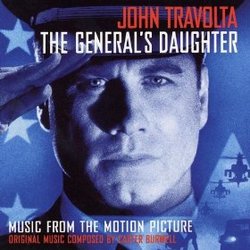 Director Simon West mentioned in the liner notes of this recording that he wanted two types of music for his film. Anyone familiar with Con Air might expect nothing but blaring electric guitars, not that there's anything wrong with that. In this case, however, he chose a mix of Carter Burwell's evocative scoring, and re-mixed Negro Spirituals. That's right, I did say re-mixed spirituals. The interesting news is that it works.

As always, I sampled this music while driving. I had just gotten back from a week in Memphis, Tennessee and Jackson, Mississippi, so my mood was set well for a southern film score. Add to that the fact that The General's Daughter is a military film, and I was currently stationed at the United States Air Force Academy in Colorado Springs, and I couldn't have asked for a better setting.

The score begins with one of the spirituals, "She Began to Lie" (Christine and Katherine Shipp), and instantly sets a mood for the film. It is upbeat, but with a hint of dread. The film itself is a serious one, but with enough levity added, especially by Travolta, so as not to drown under its own weight. Anyone familiar with the work of Mr. Burwell, knows that he is well equipped to handle something along those lines. This score most reminded me of his work on The Chamber. In that case, the music was so much better than the film that it was almost distracting. Luckily, the two complement each other successfully this time.

Perhaps most striking is the first actual piece of incidental music on the disc. The first four tracks are all the Negro Spiritual mixes, not composed by Carter Burwell. The fifth track, "Exercise in Darkness", is a piece of Burwell's score used in the movie as background for an evening military exercise. During the exercise, you witness a horrific attack, gang rape, and attempted murder of a female soldier. The music itself is melodic and beautiful—a contrast that works with superior effect here. It is powerful without being obnoxious, and its theme is used repeatedly throughout the film.

Other tracks use similar themes, but vary in their mood. Some are light while others continue this dark feeling created by the film. If Simon West knows one thing, it is how to create an atmosphere for his films (kind of the "Tony Scott School of Directing"), and Carter Burwell uses this to his advantage.

In addition to the score and the spirituals, there is an added dose of power thrown in with a recording of "O Fortuna" from Carmina Burana by the great Carl Orff. You might think that this is cliched, especially for film scores, and it is, but it serves its purpose here. It walks the line, but serves its purpose. Finally, for good measure, Burwell ties "Amazing Grace" in to one of the final tracks, "The General's End." It is a bagpipe, militaristic rendition which is cheesy, but it works.

Overall, this one is eminently "listenable." Good for driving, reading, working, perhaps not for a night of getting busy, but a strong overall score. I'd recommend this one with more strength than most. I cannot imagine you would be disappointed.