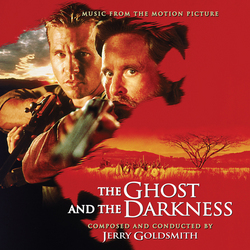 The Ghost and the Darkness - Expanded

The 1996 Paramount film The Ghost and the Darkness offered composer Jerry Goldsmith a rare opportunity to write a leitmotif-based score with a variety of themes, motifs and effects.

His main theme is a proud, martial anthem that manages to convey Lt. Col. John Henry Patterson's love for Africa and his dedication to the task of building a bridge. Goldsmith further characterized Patterson's Irish origins with a rhythmic figure inspired by the traditional "Irish Washerwoman" jig. He also composed a hopeful theme for Patterson's relationship with his wife and his yearning to see his newborn son. Goldsmith's music for the predators blends African tribal percussion and vocals into the lion attack scenes, making them part of the landscape and culture of the continent. This just highlights a few of the themes and architecture of Goldsmith's complex score.

With this release, Intrada presents a 2-CD set featuring the complete score and alternates. Goldsmith's complete music from The Ghost and the Darkness, as mixed for the finished picture, plays first on CD 1. It is followed by part 1 of the extras, beginning with alternate and unused mixes. Those continue on CD 2. Because most of the original album mixes are considerably different from their respective film versions and the alternates, and because "Lions Attack" has material composed just for the album, included is the original album program, including the five performances by The Worldbeaters under the supervision of George Acogny.