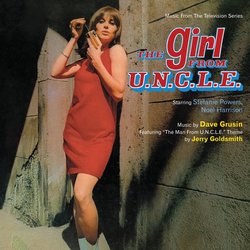 Available for the first time on CD, the soundtrack to this "cult classic" spy-spoof series, a spin-off of The Man From U.N.C.L.E.

It features music by Dave Grusin (who won a Best Score Oscar for the The Milagro Beanfield War and was nominated for "It Might Be You" from Tootsie and the score for On Golden Pond), and also includes the theme to The Man From U.N.C.L.E. by Jerry Goldsmith. The TV show starred Stefanie Powers as U.N.C.L.E. agent April Dancer (a name suggested by Ian Fleming), and Noel Harrison as her partner, Mark Slate. It aired for one season, a total of 29 episodes, from September 16, 1966 to April 11, 1967.