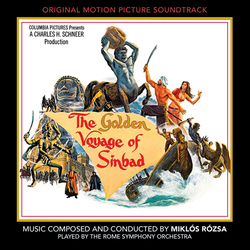 The Golden Voyage of Sinbad

Performed by
The Rome Symphony Orchestra

For this go around, Intrada offers the CD premiere of the first-generation stereo album masters produced by United Artists Records for release in 1974 and recently located in storage vaults in Italy, courtesy Sony Music. In addition to presenting the album from the original masters, Intrada includes the complete score as well, this time drawn from restored stereo music stems and also from surviving 1/2" three-channel stereo scoring session masters, 1/4" two-channel stereo mixes and 35mm full-track transfers. Although the LP program runs a generous 55 minutes, this new stereo program of the complete score runs nearly 90 minutes, all included on this 2-CD set.

Miklós Rózsa's score is lush and exotic, clearly from the pen of Rózsa, yet he fashioned something darker and perhaps subtler than his first foray into the realm of fantasy.