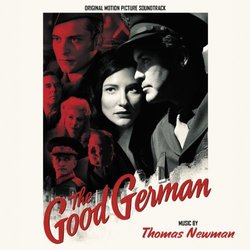 It is a great thing to have the legacy of the Newman family still providing movies with music of fine melody, artistry and individuality. To be able to chart the history of film and its shifts in tones, fads and politics, moving solely within their ranks of Alfred to Lionel, from Randy and on to David and Thomas, is remarkable. Of the current crop, Thomas has become not only an Oscar favorite, but thanks to associations with many Academy Award-winning pictures, arguably the most prestigious current composer next to John Williams. Even on projects where not much else is highly praised, his music always seems to be appreciated and lauded by all, due to his subtle scoring of drama, quirky approaches to humor and perfectly realized, cathartic moments of ebullient joy.

With The Good German, the Newman family legacy is allowed to circle back to its beginnings, not through musical patchwork or parody, but instead it is as if the spirit of father Alfred (along with that of Max Steiner, Miklos Rozsa and Franz Waxman) wove itself around notes composed by Thomas, merging their disparate styles across the years into a score of both genuine, Golden Age passion and complex, modern harmonic language. This challenging opportunity for a composer rarely occurs other than when played for laughs, but one need only listen to Howard Shore\'s Ed Wood and Elmer Bernstein\'s Far From Heaven to find similar successful examples. Bernstein had the advantage of actually composing firsthand during the specific era in film being recreated and therefore could draw upon that experience when scoring Far From Heaven. Shore and now Newman needed to transport their unique talents backwards in time, leaving behind current biases and judgments, scoring their respective films as though within that bygone age.

An alarming, arcing motif in brass and strings, almost a dark fanfare, opens the "Main Title" and finds itself heard in various guises elsewhere in the score. The next major component of the score is featured here: a warm, glowing, rapturous love theme with a slightly Eastern European flavor, due mainly to the melody often being lead by solo fiddle. Typically when this theme is revisited it is heard in full, such as in "The Good German" and "Always Something Worse", while the alarming opening motif turns a bit more insidious, winding its way into cues in suspicious high strings, ominous low basses and sometimes just charging in unexpectedly like the Spanish Inquisition ("Kurfurstendamn").

There is a host of recurring supporting motivic material in the score, such as a churning action highlight bursting into "Dora" being explored more fully later in "Rockets For Our Side", and a brief, dark suspense motif, heard in mid and low strings, almost a semi-tone turning on itself, which first appears in "River Havel". "Countless Roundheels" opens with a hesitant, flute-led variation on the love theme and leads into wavering, major-minor shifts in strings and chimes, which almost seem influenced more by David Newman than Alfred. "Kraut Brain Trust" is short but memorable due to its noble, bold horn declaration and dance-like, staccato string figures.

As the album closes out with two more winning tracks, the contemplative, regretful "Godless People (End Title)" and "Jedem Das Seine", which features the love theme on oboe, it becomes clear that Thomas Newman has hit another career peak with The Good German, as with The Shawshank Redemption and American Beauty before it, and maybe most surprisingly for a Soderbergh film. It allowed Newman the chance to stretch his talent in new directions melodically and harmonically, even while looking back to an era of movies and music far removed from the current state of both. Certainly worthy of its Oscar nomination and the attention of any serious film score fan.