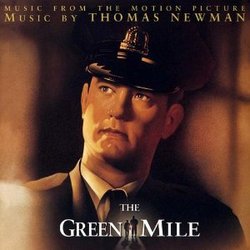 Thomas Newman did quite well for himself in 1999. Not only did he write an amazing score for American Beauty (and got himself a Golden Globe nomination as well), but he also wrote a score for Frank Darabont's highly anticipated follow-up to The Shawshank Redemption: The Green Mile. This three-hour long film focuses on the experiences that prison guard Paul Edgecomb (Tom Hanks) has on death row when John Coffey (Michael Clarke Duncan) becomes an inmate. A rather well done dramatic film, it was a shame to have been more or less ignored on the "award" front. But the score that Thomas Newman wrote is certainly worth mentioning.

Newman's score immediately places us in the South - "Monstrous Big" makes good use of piano, guitar, Jews Harp, and full orchestra to provide a sense of placement and drama. There are plenty of styles that Newman chose to use in this score. In "The Mouse On The Mile", the entire piece is performed in pizzicato, and accentuated with some vibes that echo a bit of his work on American Beauty. Similarly, in "Billy-Be-Frigged" and "Wild Bill", there are some great uses of guitar and other plucked strings. "Cigar Box" starts off with an atmospheric whistling that shows up a few times in the score, but also made a poignant appearance in American Beauty. This particular cue, however, progresses into a nice flute and piano piece with soft strings backing it up. Thomas Newman is at his best with cues like this.

One of the more horrific moments in the film was "The Bad Death of Eduard Delacroix". Disturbing, to say the least, not just because it portrayed a man being electrocuted in an incorrect and inhumane way, but also because it went on for much longer than I would have thought they ever would have let it go on. This nearly 4-minute long sequence is underscored by some rather bombastic percussive and darkly orchestral music. It most certainly feels out of place when compared to the rest of the score, but does an exceptional job of getting the heart racing - especially if you have seen the film. Unlike that cue, however, "Briar Ridge" provides a modicum of tension while retaining the flow and orchestration of the rest of the dramatic cues.

The last cue on the album, "The Green Mile", is a rather emotional recap of the main themes in the film, and is a very apropos way to end the album (I also believe that these might have been placed over the end credits). There are a few songs on this album that showed up in the film, including "Cheek to Cheek", "Old Alabama", "Did You Ever See A Dream Walking", and others. It helps to place the film in the 1930's, and breaks the score up into listenable sections without being intrusive.

Thomas Newman might not get any awards for his work on The Green Mile, it stands out as one of the better scores of 1999, and one of the better ones Newman has done lately. Released through Warner Sunset/Warner Bros. Records, this album runs a hearty 74 minutes, and should find a home in your CD collection just above The Shawshank Redemption, and below American Beauty.