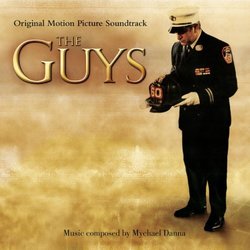 The Guys is a tragically topical story about a New York fire captain's challenging task of writing eulogies for the eight men from his station who did not come back on September 11.  Though a small, contained work, this is a poignant film, and the delicate soundtrack does a fairly good job of conveying the inherently sad tone of the work.

Adapted from a stage play by Anne Nelson, this drama centers on one story in the aftermath of the 9/11 tragedy. Nick, a fire captain played by Anthony LaPaglia, who lost eight men in the tragedy at the World Trade Center, asks for help from an editor, Joan, played by Sigourney Weaver, to prepare their eulogies. Nick builds a relationship with Joan, who helps him put together the speeches.  With sensitive, realistic performances by the leads, this challenging, sensitive work does a good job of conveying the drama without exploiting it for dramatic purposes.

Infused with a strong, somber Celtic feel, this is a soundtrack determined to take a supporting, non-obtrusive role in the film.  This music by Mychael Danna has a soft, emotional feel that is appropriate to the content of the film.  Using piano and various orchestral arrangements, the composer uses a very subtle approach to enhancing the emotions of the scenes.  The tragedy and sadness are obvious and inherent, so Danna's choice is appropriate.

The problem with this soundtrack is that because it is so subtle, the music ultimately becomes nondescript and lackluster.  Even in a piece like this, viewers need a hook of some sort to carry the audience through.  The music works well for the scenes, but in the end, it is not memorable.

In conclusion, this is a solid, functional soundtrack, but it is not particularly unique.  If you like light, delicate movie music, or are a fan of the film, this soundtrack is fine.  Otherwise, this CD would hold little appeal.