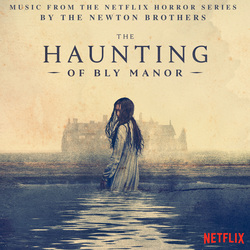 The Haunting of Bly Manor

The Paramount Television series The Haunting of Bly Manor is the follow-up series to the 2018 The Haunting of Hill House, which was based on the novel by Shirley Jackson. This time, it is Henry James' The Turn of the Screw that gets a modern retelling.The Wingrave family children Flora and Miles have been orphaned, left in the care of their absent uncle (played by Henry Thomas, also star of Hill House). Uncle Henry is hands-off, so he hires an au pair to look after and teach the children, with the companionship of and sometimes help from the cook, housekeeper and groundskeeper. Not everything is as it seems, as the history of the manor has draped the estate in a curse and there are more residents than at first meets the eye.

To score Bly Manor, the Newton Brothers return from their Hill House scoring duties to provide the regal yet mysterious surroundings with a largely string-based score, along with piano solos. The score is haunting as one would expect, but it's more sophisticated than just that—it's a mix of nostalgia, warmth, angst and confusion. Memories, tragedy, love, family...a home's history is a complex mixture of emotions and experiences that makes haunting a complicated business. To musically envelop Bly Manor with all these mixed emotions, The Newton Brothers assembled an orchestra comprised of 10 violins, four violas, four cellos, and one bass. The dominant solo color comes from the piano, which seems to capture the complexity of Bly Manor's history all by itself.