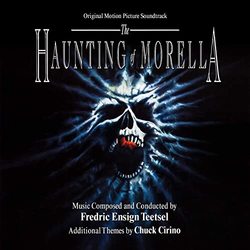 The Haunting of Morella

Wynorski's regular composer, Chuck Cirino, was not able to work on this film so Concorde hired a first-time film composer named Fredric Teetsel, who was able to provide Morella with a symphonic orchestral score. What became the film's main theme was a simple melody of Cirino's that Wynorski was especially fond of, and has insisted on using in several of his films. In addition to Cirino's themes, Teetsel composed several themes or motifs of his own, but even these were rooted in Cirino's thematic architecture. Teetsel's connections as an arranger and composer for performing orchestras in Arizona, including the state's major symphony orchestra, allowed the film to have a period-supporting orchestral score without exceeding its budget.

Dragon's Domain Records is excited to bring The Haunting of Morella to compact disc for the first time, mastered by James Nelson at Digital Outland with exclusive liner notes by author Randall Larson, with the participation of the composers.