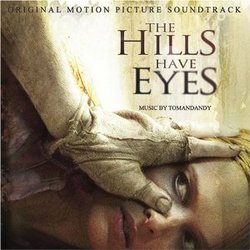 The Hills Have Eyes

Review: Hills Have Eyes, The

Film music\'s primary objective is to work within the movie. What it does and how it behaves outside of the film for which it was composed should be irrelevant to the composer. If the music achieves an emotional synchronicity with the images on the silver screen and makes for a great Christmas stocking gift, then all the better. The Hills Have Eyes gets the job done and provides the viewer with the necessary gloom and despair, but the common listener is left with a 70-minute album that is somewhat sparse and largely uninteresting on its own.

The film itself is a remake of a rather iconic horror movie of a past decade. See The Amityville Horror. See The Texas Chainsaw Massacre. See... well, we could play an interesting game of "fill in the blanks" with this one. A family is en route to California and ends up within the murdering clutches of another family, this one composed of mutated freaks. Screams and acts of senseless violence ensue. The soundtrack release begins with a block of nine songs that weave their way in between the vastly different categories of punk, metal, and country. It always puzzles me how mass-marketed horror movies often come to be associated with heavy metal (or at least hard rock) songs, other than the fact that both products are often linked with rebellious teenagers, the primary audience. "Leave the Broken Hearts", "The Walls", and "Daisy" all fall into that general category of "angry teen music", where talentless singers try to hide their lack of proper training and their tone-deafness with loud, feral screams. I actually found myself liking "The Walls": its Rob Zombie-esque edge was mercifully toned down by the singer\'s rather soft voice. The last song on the album is a bland cover of "California Dreamin\'" which is eerily identical to the Mamas and the Papas\' original, except for the strange quality of being slightly off, which I guess serves the movie.

The score by tomanandy is well crafted. Acoustic elements are left aside for the most part, the composing duo utilizing distorted samples and a small array of synthesizers to create a desolate soundscape. The locale seems to have inspired them to create most of their sounds out of guitar samples which they distorted and processed in various ways. Aside from the electronic textures, most of the score is made up of rock band sounds that have been mutilated and mutated (to stay within the film\'s jargon): short cymbal hits accentuate scenes of violent attacks, a bass plays a simplistic yet unnerving recurring motif (a dotted quarter followed by an eighth note and a quarter note), guitars are overdriven in the background. The bulk of the score, with its slowly moving textures and electronic sound design, recalls a slightly more dynamic and aggressive Dark Water, with hints of In Dreams\' craziest moments and Alien: Resurrection\'s electronic edge. The main theme is kept hidden for the most part, only heard on faint glass harmonicas in the background, until the final cues where it erupts on the electric guitar in a fun and victorious spaghetti western finale.

The problem with the album is that, apart for fans of electronic sound design and musique concrète, the music is not that interesting when plucked out of its context. There are very little action cues and too many pieces where bare motifs move like snails amidst an atonal backdrop. "Next Morning" offers an interesting combination of sounds and the last four cues present a retaliation of the acoustic and orchestral elements over the electronics, but the bulk of The Hills Have Eyes is flat. It is smart in its construction and probably sells the visuals but, on its own, it does everything visceral horror shouldn\'t do: it\'s boring.