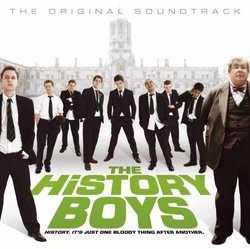 The History Boys is a film adaptation of Allen Bennett\'s successful Tony Award-winning play bearing the same name. I have not seen the film or the play, but the soundtrack for the film is a nice mix of early 80\'s alternative rock with a few jazz standards mixed in. Set in the early 1980s, The History Boys is about eight high school age boys in their late teens and their quest to get into prestigious English Universities like Oxford and Cambridge. Appropriately, the soundtrack is made up of classic cuts by The Cure, Echo and the Bunnymen, The English Beat, The Pretenders, The Smiths and The Clash among others. The music offers the perfect early 80\'s alternative contrast for the world of British teenagers in a stodgy, traditional boys\' school.

However, not all of the songs fit into the category of 80\'s alternative music. The first song on the soundtrack is a WWII song called "Wish Me Luck" by British singer and actress Gracie Fields. There are also a few songs sung by members of the cast on the soundtrack ("L\'Accordioniste", "Bewitched" and "Bye Bye Blackbird") which aren\'t all that interesting outside of the context of the film - they sound amateurish. One standout is Rufus Wainwright\'s gorgeous rendition of the song "Bewitched". This is the second version of the song on the album; Samuel Barnett from the cast performs the first version. Wainwright has a voice that is always beautifully resonant and mesmerizing, and he takes "Bewitched" and, with his beautiful cabaret-style piano, makes it his own. Barnett\'s rendition is good, but it pales in comparison to Wainwright\'s dramatic cover.

The first 80\'s tune on the soundtrack is "Blue Monday" by New Order. Heavy on the synthesizers and ominous, this song is one of the more iconic songs of the eighties; instantly recognizable and danceable, it is a great choice for this soundtrack. Directly following "Blue Monday" is The Smiths classic, "This Charming Man". This was the second single off of the Smiths self-titled first album, and to me it is one of the more enjoyable Smiths songs ever recorded .The song is upbeat, and Johnny Marr\'s jangly guitar shimmers. Songs like "This Charming Man" help to explain the fervor some feel for The Smiths and Morissey. These two songs are just the beginning of an excellent assortment of classic 80\'s tracks. Other notable tracks on the soundtrack are The Clash\'s "Mustapha Dance", Echo and the Bunnymen\'s "Never Stop", The English Beat\'s "Can\'t Get Used to Losing You", The Cure\'s "A Forest" and The Pretenders\' "2000 Miles". These tracks are all top-notch, but there are two songs that really stand out: The Clash\'s 1982 masterpiece "Mustapha Dance" and The Cure\'s "A Forest". "Mustapha Dance" is a dubbed out dance remix of the classic Clash single "Rock the Casbah". The track is infectious, with its tribal beats and dance hall accessibility. I thought "Rock the Casbah" was played out until I heard this excellent remix. The Cure\'s moody and sparse classic "A Forest" is also worth mentioning, it\'s a true classic. A fan favorite, this song embodies what most people love about The Cure: the dark haunting melody, the hypnotic synthesized drums, Robert Smith\'s rhythmic chugging guitar work, not to mention his warbly wail of a voice. The version off the soundtrack comes off of the 1980 album "Seventeen Seconds" and is sparser and more minimalist then some of the more popular live versions. It is nice to hear the song in a stripped down and condensed way, as it was originally conceived.

I could go on and on about the songs on this soundtrack, because I like the selection a lot. I can do without the songs by the cast members, but there are only a few of those. Personally I think that The History Boys soundtrack is one of the finest 80\'s compilation soundtracks in recent years. I cannot comment on the film itself, but considering the quality of the soundtrack, I am definitely interested in checking it out. Fans of early 80\'s alternative rock probably have most of these songs in some form, but for those that don\'t, this soundtrack is a good stepping off point.