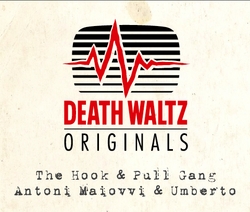 The debut release on Death Waltz Originals is not only a brand new recording from Umberto & Antoni Maiovvi entitled 'The Hook & Pull Gang' but also doubles as a brand new re-score of the notorious classic The Texas Chain Saw Massacre.

The double album comes on coloured swirl vinyl and will be released at Mondo-Con and Beyond Fest 2014.

This release is limited to 800 copies worlldwide