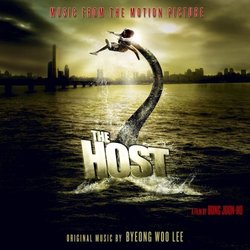 The Host is one of the most pleasant cinematic surprises in recent memory. A strange and compelling combination of family drama and 1950s-style social paranoia monster movie, it has become South Korea\'s most successful film and garnered a cult following with Western audiences. It\'s also blessed with a superb score by renowned Korean guitarist Byeong Woo Lee. Known for his versatility across a range of musical styles, Lee\'s work here exemplifies his ability to shape thematic material to suit a wide variety of moods (and I mean wide) without ever overpowering the images.

It helps that he has given himself a knockout theme to work with. I\'m not sure if Lee intended for it to be as infectious as it is (thereby perhaps suggesting the virus of the film) but I have had it firmly planted in my head for four days now, and it\'s not showing any sign of letting go. Because it shifts its shape so effectively, it\'s hard to say which track carries the theme\'s purest expression. "Hyun Suh!" perhaps comes closest and, as a result, is one of the best pieces of film composition I have heard in some time. The piece develops beautifully, its driving strings and irregular time signature pushing the melody ever forward. Not only does it express the hope and desperation of the family\'s quest to save their beloved Hyun Suh, it adds some needed momentum to the story and captures the distinctly melodramatic tone of the film.

"In Praise of the Han River (trumpet version)" gives the theme a slightly more comical treatment, its bouncing bass line and solo trumpet lending a sinister, wry quality to the music. This is echoed in a vocal version which cases the theme as a song with verse and chorus, moving into a surreal arrangement with trombone and piano accordion providing a circus-like atmosphere and electric guitars adding to the confusion. The strained vocals of Jae Hyung Jang are not always easy to take, but the octave-stretching melody would, I imagine, prove a challenge for any vocalist. A similar arrangement forms the second half of "Yellow Virus", used to great effect in the film to underline the farcical element of the family\'s escape from hospital.

"Most Wanted" gives the theme an iteration on solo guitar to accentuate the isolation of the siblings when they find themselves separated. It works astonishingly well. Fragments of the melody are used in "The Monster\'s Lair" and "Checkpoints in the Rain" to express the hopelessness of Hyun Suh\'s situation and in "Wet Newspaper", "Reunion" and "Abandoned Song" to lend a poignancy and emotional depth to the story. "Running Lonely", and its second version, feature rich, haunting piano phrases that add another layer to the musical texture of the score.

But I don\'t want to give the impression that this score is a one-trick pony; it contains some other tremendously effective elements. Lee\'s use of strings is particularly colorful, exploring the range of effects attainable by violin and viola. Hyun Suh\'s initial abduction, which takes place in near silence except for a delicately held note on the violins, shows how subtly Lee can employ them. At other times, as in "Yellow Virus", the strings take on an unhinged, Psycho-esque quality. "Unreachable Hand, Can\'t Let Go of the Hand" marks a pronounced departure from the melody, signaling a change in our hero\'s mental state (which I won\'t give away here…). Its arpeggiated violin motif, underscored by steadily rising and insistent strings, perfectly conveys his psychological shift and newfound sense of purpose, as well as keeping the story rocketing along.

Percussion is another important part of Lee\'s approach. In "Sudden Attack in Broad Daylight", the steadily increasing rhythm echoes the heartbeats of both characters and audience as the creature makes its first unceremonious appearance on land. In "Smart Fugitive", the almost primal rhythms, accompanied by distorted electric guitar, project a sense of the characters\' increasing madness in their seemingly hopeless search for Hyun Suh.

Lee\'s use of synthesized sounds is generally well judged. I wouldn\'t want to forget to mention the wonderfully creepy openings of "Prologue: Mighty Han River" and "The Monster\'s Lair", where a subtle synthesized vibraphone hints at the way the film balances its B-movie excesses with a more delicate, humane approach to the storytelling. There is one moment that jars, though, in "Starving Brothers" where Lee relies a little too heavily on obviously artificial orchestration. Amidst the otherwise wonderful orchestral and synth performances, it sticks out like a sore thumb, even though it only lasts about twenty seconds.

As another minor quibble, it\'s worth noting that in December 2006 Milan Records released this soundtrack for France with forty listed cues. The overall difference in length is less than three minutes, but I imagine that the sequencing on the French release makes more sense than that on the US release, which clumps together short and unrelated cues.

It\'s a petty quibble though. When the music is this good, it\'s hard to complain.