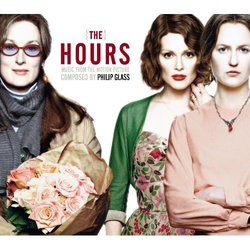 Your response to that opening joke is probably a good indicator of your response to Nonesuch's beautiful release of Philip Glass's new score to The Hours.  Some will find it remarkably insightful, others mildly interesting, and some abysmally dull.

Stephen Daldry's film of the Pulitzer prize winning novel The Hours is an intricately crafted, stunningly acted examination of three women in three times linked through one novel.  The first woman, Virginia Woolf, is suffering from mental illness and confinement and is beginning one of her most celebrated novels, Mrs. Dalloway.  In the 1950s, Laura Brown is a mother and housewife suffocating in her life when she begins reading Woolf's novel.  Clarissa Vaughn is a modern Mrs. Dalloway, outwardly holding everything together while inwardly falling apart.  As in the novel, we follow these three women through one day, as similar events in their lives allow us as an audience to seamlessly transition among the various stories.

How Glass's score fits into this tightly woven picture is the center of much controversy as reviewers have alternately loved and deplored its effect in the film.  Unlike most film composers, when Glass scores a motion picture, his music takes over scenes instead of unconsciously supporting them in the audiences mind.  For that reason the majority of his film projects have been movies with little to no dialogue where the music and images exist in tandem, such as in Koyaanisqatsi and Kundun.  Many have charged that in The Hours, an extremely literary film, the music is obtrusive and out of place.  I will agree that the music is obtrusive, but I believe it is a perfect fit for the film for three reasons.

First, The Hours is an extremely cold film, almost sterile in its examination of these three women.  A detached tone is carefully constructed and audiences are invited to watch and observe but not emotionally invest in the characters.  As a musical phenomenon, minimalism adopts the same tone.  It is a music whose aim is to remove expression in music.  Listeners engage intellectually or allow the music to wash over them, but they never are asked to engage themselves.

Likewise, minimalist music revels in its structure.  The process of continual change through repetition replaces large-scale musical form in works of this kind.  These processes are audible and allow listeners to immediately grasp the works structure.  As a movie, The Hours is similarly infatuated with its structure.  Those seamless transitions in time encourage the audience to find parallels among the three stories, much as the continuous repetition of musical material in the score urges listeners to hear the parallels and symmetry in its construction.

Finally, all critics of this music remark on its hypnotic, trance-like effect.  Daniel Mendelowitz has even said that in much minimal art, one feels a weariness of mans spirit, a desire to escape into an enfolding quietude from the pressure of a frenetic, discordant world.  All three protagonists are searching throughout their day for ways to escape their lives.  If only we could tell them to simply sit and listen to the score.

So, I believe the score fits the aesthetic world created by the movie perfectly.  However this fact does not fully answer the question: is this a good score?  In function, yes it is.  It adds not only to the sense of distance from the proceedings engendered by the production, but adds to its omnipresent sense of dread.  Consider the cue "Tearing Herself Away". Laura leaves her son at a sitter and as she drives away, the pounding asymmetrical repetitions of Glass's piano and strings emphasizes her mental instability.  We are filled with the sense that anything could happen at any time.  Many cues function in this manner to stunning effect.  Its function is even more obvious when the music is absent, as when Woolf flees her home.  In that scene, the sense of urgency dissipates, and we return to dispassionate observation.

As a separate listening experience, the score does not hold up. If you are familiar with Glass, you will already have an opinion as to whether or not you will appreciate it (like my joke at the beginning), and I can but urge you to follow those inclinations.  It contains, ironically enough, motives and sounds that appear to be recycled from other Glass scores, notably his re-imagining of Dracula, so you can reasonably know what to expect.  The disc is well-made and packaged, and the performances of the string orchestra and piano are very fine.  What most recommends this recording over other scores is that each cue effortlessly flows into the next, allowing a listener to hear the score as a full experience apart from the film, a rarity in film composition.

If you are looking for something new from the composer, look elsewhere.  But as a listening experience separate from the movie, I can think of worse ways to spend a few Hours.