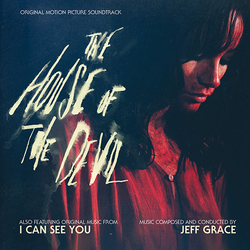 The House of the Devil / I Can See You

Our favorite master of the avant garde, Jeff Grace, is back with two new scores both featured on this spine-chilling album: The House of the Devil (the new film by The Roost director Ti West) and I Can See You (a highly original thriller directed by Graham Reznick, who also contributed two tracks to this soundtrack).

As always, Jeff Grace approaches the horror genre and his films with an unmatched freshness. Right from the creepy opening of The House of the Devil, with its detuned piano theme, through the ominous string writing and the atonal, intense action music, The House of the Devil is—in our opinion—the best American horror score of the year. And I Can See You is not far behind, and certainly also a very special score where Grace surprises with some Tangerine Dream-inspired atmospheric electronic music in addition to his trademark string writing.