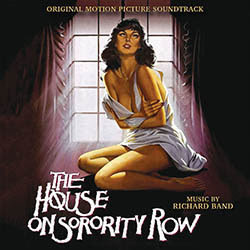 The House on Sorority Row

Considered by fans as one of the most beautiful indie horror music of its era, Mr. Band's orchestral score is thematically rich and absolutely teaming with drama and suspense. Like Rosman's film itself, the score sets its sights higher than most of the 80's slashers the movie has often grouped with, and the result is a rewarding and sumptuous listen. Produced by Richard Band, this re-issue has been remastered by James Nelson and expanded with previously unreleased bonus tracks (this bonus material is sourced from mono elements). All-new and exclusive liner notes from Daniel Schweiger (featuring new comments from the composer and director), and classy-creepy art direction from David C. Fein compliment this exciting release.