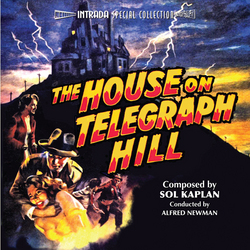 Other ideas appear as well: highlights include snare drum adding rhythm to chromatic "Polish" theme for woodwinds; rich major & minor chords for trombones playing under variants of main theme during "Fear Of The Past". While some respite comes with lilting, wistful melodic ideas heard in cues such as "Aunt Sophie", "The Playhouse", angled main theme, dark atmosphere never really disappear. Powerful music! Fox executives liked score so much they had portions of it re-recorded for subsequent thriller Dangerous Crossing. Certainly one of under-rated composer's finest works!