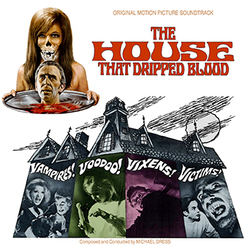 The House That Dripped Blood

The House that Dripped Blood was one of the most entertaining of the Amicus anthology horror film series. The four tales were all based on short stories by Robert Bloch, who also wrote the screenplay. In the director's chair was Peter Duffell, whose first major film it was (he'd done one low-budget film a decade prior).

One of the most interesting choices the filmmakers made was the composer, Michael Dress. For The House that Dripped Blood, Dress created a wonderfully atmospheric score – some of it lives in the world of Humphrey Searle's The Haunting, but Dress's music is his own and it really gives the stories in the film an interesting texture and feel. There's a lot of percussion and weird effects, organ, a solo female voice floating in the air, harpsichord, vibes, strings – it's all very hallucinogenic and off-kilter and really wonderful.

This is the premiere release of The House that Dripped Blood. The transfers were made from the 35mm magnetic music-only mixing elements and the mono sound is crisp and clear and really excellent.