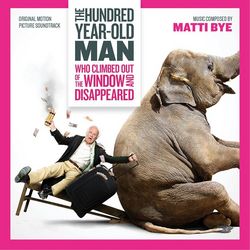 MovieScore Media releases the colorful globetrotting, award-nominated score from The Hundred Year-Old Man Who Climbed Out of the Window and Disappeared, the film adaptation of Jonas Jonasson's bestseller of the same name. The music was nominated for the Swedish Film Academy Award, the Guldbagge.

The music is courtesy of Matti Bye, a Swedish film composer who is most famous for his incomparable style of improvisation on the piano.

The score for The Hundred Year-Old Man Who Climbed Out of the Window and Disappeared offers an exciting kaleidoscope of various genres and styles. Although the piano is still dominant ("Intro"), the score covers several different eras of the last century from the Russian-sounding "Red Square" through the Gershwin-esque "Manhattan" and the Bond-flavored "Espionage" to the macabre "Funeral March." If you're looking for an underscore that transports you through an entire century in one sitting, Matti Bye's work will not disappoint!