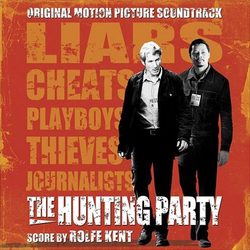 Performed by
The Bulgarian Symphony Orchestra

Toto, I\'ve a feeling we\'re not in Bosnia anymore.

There is a trend slowly emerging in film music. Maybe it is too early to call it a trend. Maybe it should be called a slow drift for now. It used to be that the Classical symphonic orchestra was used to score Hollywood movies that took place around the world, with the composer perhaps using a regional mode or a solo "ethnic" instrument to change its sound ever so slightly. Then came Gladiator and Black Hawk Down which seemed to indicate that it\'s okay to leave the orchestra behind as one enters a different country and to compose exclusively for the "ethnic" ensemble. This style has gathered much steam over the past few years as films about the Middle East and the situation in Iraq and Afghanistan have been gaining in numbers. It used to be the sound of the duduk could only be recognized by Armenians and fans of Peter Gabriel; now, anyone with a membership to Netflix can recognize that haunting nasal sound.

The slow drift seems to be toward uprooting traditional "ethnic" music into a global landscape where sounds are stripped of their identity. Mychael Danna\'s score to The Nativity Story, which merged the Middle Eastern music of two millennia ago with early Christian music, explored that idea, as does Battlestar Galactica which combines instrumental sounds from various cultures into a global, human sound. Rolfe Kent\'s score to The Hunting Party, which takes place in Bosnia, possesses Eastern European elements, but also a distinct Middle Eastern and North African flavor. In fact, when one gets into the specifics of Kent\'s instrumental array, one finds an international quality even more disconnected from the Bosnian locale than one originally thought: Bosnian and Croatian percussion coexists with Middle Eastern frame drums, Turkish tambours, and Irish bodhrans, while the plucked and hammered strings come from all over the world, with particular use of the oud, the dulcimer, the Spanish guitar, and a modified requinto. This should come as no surprise to fans of the composer: his recent "Main Title Theme" to the Showtime program Dexter was a melting pot of reggae, Latin music, and Irish bouzouki. The crucial point here is not whether this "globalization" approach is theoretically warranted, but whether or not it works. The short answer: it does.

The album opens with a strong albeit short cue that propels us straight into the action with complex drumming patterns layered on top of each other. The strings enter in full Arabic mode, stating the main theme built around traditional Middle Eastern augmented seconds, the kind of harmonic interval that gave the History of the Ring theme that ancient quality in The Lord of the Rings. The music here and in much of the score evokes Danny Elfman\'s modern phase of percussive experimentation and complex dissonance as well as David Arnold\'s more exotic work in the James Bond universe. There are quiet pieces, such as "Duck Reunited with Simon", which evoke sadness through the use of a single guitar or oud backed by a discreet string ensemble. The suspense elements are brought to life by a more sparse use of percussion and the return of the strings to Middle Eastern idioms, such as in "Kidnapped!". In between these introspective laments and scenes of tension, Kent provides what are perhaps the most enjoyable cues on the album: the driving cues. "The Drive Up to Celibici" is a highlight, with expansive string landscapes and propulsive rhythms for Eastern European percussion. "Pursuit of the Orange Cars" is a modernization of Kent\'s style, with electronic loops and an electric bass complementing the organic percussion. At 42 minutes, the score never overstates its welcome; instead, a wide selection of songs complete the hour, ranging from the Bosnian rock of Nirvan Pisoljevic to the raï-inspired harshness of Franco-Algerian Rachid Taha\'s "Barra Barra", which was incidentally used in Black Hawk Down.

Inspired by the strong Muslim and Christian traditions of Bosnia, Rolfe Kent has created an intriguing and effective blend of Eastern European and Middle Eastern musical styles, with the odd Irish drum and Spanish guitar thrown in for good measure. With his scores to Mean Girls, About Schmidt, and Matador, Rolfe Kent has definitely been carving for himself an enticing and uncharted territory in the world of film music. He has become an expert at creating original ensembles out of exotic instruments scattered all over the world and at coming up with new styles and genres in which these creative ensembles can indulge. There are few film composers these days who do truly groundbreaking work: The Hunting Party confirms Rolfe Kent is one of them. With its unique take on the exotic thriller genre, The Hunting Party is a solid recommendation for anyone wanting to get a glimpse at where film music might be headed.