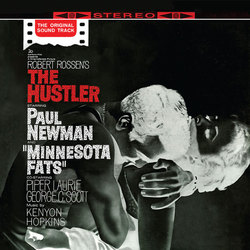 In the 1961 20th Century Fox film The Hustler, one of the elements that keeps the film resonating is its extraordinary score, perhaps the masterpiece of its composer, Kenyon Hopkins. Hopkins had shown a consistent, passionate commitment to the jazz idiom, along with a respectful acknowledgment of American blues and roots music. The moody, atmospheric, and determinedly ambient music is relatively sparse, but no less powerful in the film. Like the film itself, Hopkins' score is both gritty and tender and sweetly redolent. His top-of-the-line players include pianist Hank Jones, sax player Phil Woods, trumpet maestro "Doc" Severinsen, and the likes of Bernie Glow, Jerome Richardson, Jimmy Cleveland, Milt Hinton and Joe Wilder Hopkins. The score features extraordinary use of oboe, flute, French and English horns, and muted trumpet—not necessarily colors of first choice in jazz—to lend gravitas to the more serious, melancholy moments in the score. Much of the music here is "city streets"-style jazz: potent yet minimalist—and about as far from traditional Hollywood symphonic scoring as one can get. And yet, Hopkins respects tradition by providing recurring themes and motifs, often to underscore characters as well as onscreen action.

This new release from Intrada was assembled from the original multi-track stereo session elements in the Fox vaults by Mike Matessino, and showcases expertly one of Hopkins most important works. Hopkins remains a film music enigma—with a multitude of film and LP credits, but very few CD releases.