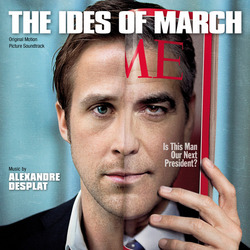 The Ides of March

George Clooney is back in the director's chair for The Ides of March, a highly charged political thriller based on Beau Willimon's play Farragut North. During the frantic last days before a heavily contested Ohio presidential primary, an up-and-coming campaign press secretary (Ryan Gosling) finds himself involved in a political scandal that threatens to upend his candidate's shot at the presidency. George Clooney also stars as the annointed candidate, and the supporting cast features Paul Giamatti, Philip Seymour Hoffman, Marisa Tomei, Jeffrey Wright and Evan Rachel Wood.

Alexandre Desplat, fresh off his score for the summer blockbuster Harry Potter And The Deathly Hallows - Part II, scales things back a bit and takes a darker tone for this insightful and revelatory look at the world of politics.