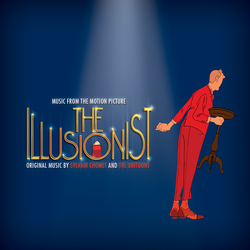 The new film from Sylvain Chomet, the director of The Triplets of Belleville. The Illusionistis a story about two paths that cross. An outdated, aging magician, forced to wander from country to country, city to city and station to station in search of a stage to perform his act meets a young girl at the start of her life's journey. Alice is a teenage girl with all her capacity for childish wonder still intact.

A script for The Illusionist was originally written by French comedy genius and cinema legend Jacques Tati as a love letter from a father to his daughter, but never produced. Sylvain Chomet, the Oscar-nominated and critically acclaimed creator of The Triplets of Belleville, adapted the script and brought it to life in his distinctive hand-drawn animated style.

The soundtrack was composed by Sylvain Chomet himself, with a few tracks credited to The Britoons. In the theme song "Chanson Illusionist," one can recognize the voices of Joséphine Baker, Les Frčres Jacques, Georges Brassens, Barbara, Charles Trenet, Édith Piaf, Jacques Brel, and Serge Gainsbourg—all impersonations of course.