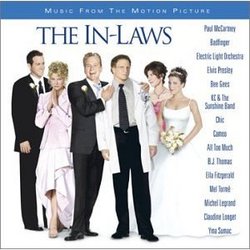 The In-Laws is a remake of the 1979 Peter Falk / Alan Arkin film. This one stars Albert Brooks and Michael Douglas, and while the score was written by Lalo Schifrin, the soundtrack album is filled with an hour of enjoyable pop songs that pepper the film. Most (if not all) of the songs are of a celebratory nature, or at least invoke that happy feeling.

With some unreleased tunes by Paul McCartney (including an alternate rendition of "Live and Let Die"), the album also includes a dash of Elvis, the Bee Gees, KC & The Sunshine Band, Mel Torme, Yma Sumac, and more. Overall, it's a solid hour of music that is sequenced in such a way that the songs seem to flow nicely from one to the other, and the listener never seems jolted.

This album has a little something for everyone - and if you enjoyed the music in the film, I'm sure you'd enjoy this soundtrack. It's just a shame that there are no tracks from Schifrin's score here, but I suppose that's just part of the trend.