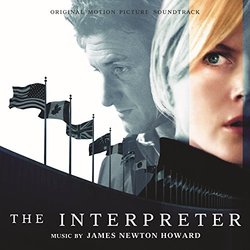 Having composed more than fifty film and television scores since 1985, James Newton Howard has shown considerable versatility in the style of his music. He may be recognized most for the bright, energetic sound of his animated scores for Dinosaur and Atlantis: The Lost Empire, and action scores like Waterworld and Vertical Limit, or for his more suspenseful scores to M. Night Shyamalan's films. But Howard's abilities far outreach his renown: his music achieves dramatic tension in Outbreak, triumph in Hidalgo, a dark and emotional power in "Tarawa" from Snow Falling on Cedars, and a cool, jazzy sound for the main theme from the television series "ER". Yet with The Interpreter, he gives us a more subdued approach to the underscore.

For the record, I really liked this movie, and I love this score. While there is some down time and the album only runs 45 minutes, and though a few percussion cues become heavy and may irritate an otherwise smooth listen, these minor flaws are few and far between, and their function in the movie forgives their presence. If I were to set this score against its genre, I would say it comes closest to something of a cross between the softer side of Zimmer's The Peacemaker and the percussive cues from Gregson-Williams' Spy Game.

There is remarkable variation within the score as well, and the cues seem to fit in to one of three categories: ethnic, suspense, and character. The movie's plot involves a small fictional African country called Matobo and though only one scene is shot there, this country is present throughout the film. The first track, "Matobo," uses ethnic woodwinds and percussion to represent the country, and the same instrumentation is used for all the ethnic cues. Two tracks - "Drowning Man Trail" and "End Credits" - include the traditional African hymn "Atolago," performed by Kristen Braten Berg, accompanied by the ethnic sound. The other track that uses this instrumentation is "Simon's Journals" because it involves a character from Matobo.

Otherwise, the film takes place in New York City in and around the UN, and as a suspense movie, the music must at times capture the pace of the city and the tension of the scene. These tracks include "Guy Forgot His Lunch," "Silvia Showers," and "Zuwanie Arrival at UN." They are characterized by percussion, at times heavy, but often light and quick, and by moving bass-lines and strings; there are also a number of wonderful brass cues that lend sound color to the percussion and string base. It may be difficult to appreciate these cues on album alone, but they are perfect for their respective scenes. The last twenty seconds of "Zuwanie Arrival at UN" uses a percussion rhythm and chords fairly reminiscent of "Resurrection" from Debney's The Passion of the Christ.

And the third category is character. Fortunately, the film is driven by the characters and their interactions, so the music from these scenes is actually the more significant part. These cues are scored with piano, often played with single notes that occasionally move into chords, and by a solo oboe and acoustic guitar; there is also a solo flute and violin, and some lighter horn color. "Silvia is followed" and "Tobin Comes Home" are the first tracks for these respective characters; "Did He Leave A Note" is a beautifully emotional track, both for the movie and on album; and these motifs and instruments all come together with the African sound in the "End Credits."

I have been struggling some with the idea of a theme, and trying to figure out what Howard had done regarding this. As there are three styles of music in this score I did not expect there to be one all-encompassing theme. The African ethnic cues use the "Atolago" hymn and the suspense cues wouldn't really be thematic as they are mostly percussion and music for the mood of the movie. But I did expect a theme for the characters, and I don't think there is one. As divided as the film's needs are, it seems Howard wrote the character scenes as the mood required as he did for the other parts; but fortunately, the score is not without motifs. I heard it first in the "End Credits": a three note descending pattern that begins with a flute and is later picked up by the strings with a horn, then passed to the piano. At this point, the acoustic guitar picks up a variation of the motif, and it is this variation along with a few others in the piano that appear in earlier tracks; the actual 3 note descension does not occur outside of the last track. The score comes together as a whole more through the sound and instrumentation and style than through a theme that would weave throughout.

This score is perfect for the film, and makes a good listen on album, often exciting, at times beautiful. The tone reflects both the suspense and emotion of the situations and characters, and captures the underlying African sentiments of the movie. Though it works without it, I would have liked to have heard a more cohesive theme, but my only true disappointment is that this score may be overlooked as typical background score between the quiet character moments and percussive suspense cues, without a careful listen.